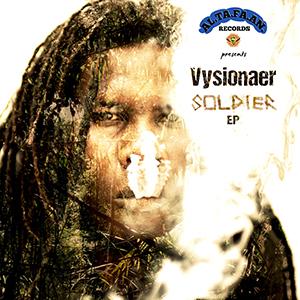 'Life Designs', the as yet unpublished debut of Delroy Brown aka Vysionaer was still produced by Calibud, but for "successor" 'Soldier', the artist from Balaclava in Saint Elizabeth joined forces with Al.Ta.Fa.An Records producer Anthony Senior. This resulted in 5 tracks stylistically catapulting us back to the new roots era of the early 2000s, when artists like Lutan Fyah, Junior Kelly, Jah Mason and of course Sizzla reigned supreme. The track list includes 'Marley', a catchy tribute to the king of reggae, title track 'Soldier Man', a tribute to Anthony Senior who still served in the Jamaican army for a while, and opener 'Bring Back Love', for which Anthony Senior revived the riddim we remembered from 'Youth', JahVibe's duet with Anthony B from the former's 'More Prosperity' EP (Al.Ta.Fa.An Records, 2016). Perfectly produced calling card for this talented Jamaican newcomer!