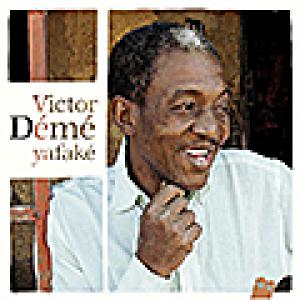 On December 21st 2015 Burkinabe troubadour Victor Démé succumbed to a heavy surge of malaria. At the time, Démé had just finished recording his third long player, and 'Yafaké', Dioula for "forgive", is now released posthumously on the World Village label. In light of the political situation in Burkina Faso, where a coup attempt was toppled earlier this year, Victor encourages his countrymen not to lose sight of values like tolerance and mildness. The title track has a bit of a country-vibe, but the rest of the songs on this album have that typical meanwhile familiar sounding West African sound (that being said, we have to point out that for the recording of 'Yafaké', Victor for the first time made use of a drum kit, and that in 'Karaba' a prominent place is reserved for Fixi's accordion). The issues Démé raises on 'Yafaké' range from respecting the planet by trying to counter environmental pollution ('Makelekote'), over the importance of agriculture in the survival of mankind ('Kondabasie'), to Victor wishing us all the best for the new year ('Ani Sankurra'), and cynically enough, with 'Bana Djougou' ("bad disease"), the track list even contains a song about the disease that would eventually also take his own life. 'Yafaké' is a more than dignified farewell from this Burkinabe veteran.