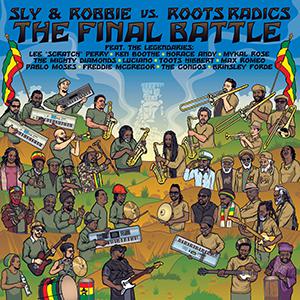 It doesn't happen very often, but on rare occasions the wildest reggae dreams can come true. 'The Final Battle' started with an ambitious idea by Argentinean percussionist and producer Hernan Sforzini, who dreamed of letting Sly & Robbie and the remaining members of the equally legendary Roots Radics play it out against one other in a final ultimate clash.

Hernan pitched his idea with Sly & Robbie when they came to Argentina during one of their tours and to his own surprise they were immediately interested. As far as the Roots Radics were concerned, the puzzle was a lot simpler as Sforzini had been good friends with bassist Errol 'Flabba' Holt since 2005, and when he called him with the proposal, Flabba spontaneously replied: "Hernan, I supposed that an album like this was going to happen at some point in history, but I never imagined that you were going to be the one who proposed it; so here I am, when are you coming to record us?". To be able to speak of a real clash, we would have preferred to hear both bands each time play the same riddim, but in the end both Sly & Robbie and Roots Radics each chose 6 of their own compositions.

To spice things up, both bands were supplemented with musicians like saxophonist Dean Fraser, melodica-player Addis Pablo, percussionist Bongo Herman, and guitarist Earl 'Chinna' Smith, and for the vocal side of the songs a series of legendary Jamaican vocalists were asked to do their thing over one of the riddims.

The album opens with 'This Morning', Michael Rose in combination with Sly & Robbie, giving you the success formula behind Black Uhuru; 'The Final Battle' couldn't really have asked for a much stronger opener. Brinsley Forde this time didn't opt for Sly & Robbie, but, together with Roots Radics, recorded 'Ulterior Motives', a song that seems to be both reminiscent of Luciano's 'Ulterior Motive' and Peter Tosh's 'Maga Dog'. 'Change My Mind', is lovers like only Mighty Diamonds can deliver, for the occasion backed by Sly & Robbie, and highly recommended listening for the fans! Freddie McGregor is usually not averse to a dash of lovers rock, but this time, in the company of Roots Radics, opted for an excellent roots anthem with 'Glory'. Both 'Mind Your Own' and 'Gwan Run Up Your Mouth' are classic Horace Andy and Pablo Moses, and accompanied by Sly & Robbie even Lee 'Scratch' Perry shows his best side in 'Full Moon Plant A Tree'. With 'The Gates Of Hell' Max Romeo gives a foretaste of his soon-to-be-released new album 'Words From The Brave' and crooner Ken Boothe was so impressed after his visit to Argentina that for 'Argentina' he personified the country as an attractive woman with whom he has fallen passionately in love. The only little flaw in the track list is Toots Hibbert's contribution 'To You Roots', proving the singer's voice clearly has lost the power it once had.

Finally, the sleeve design of the album, somewhat reminiscent of the traditional images of Ethiopian battles such as the famous one against the Italians in Adwa in 1896, is the work of Slovenian graphic designer Ohoroho.