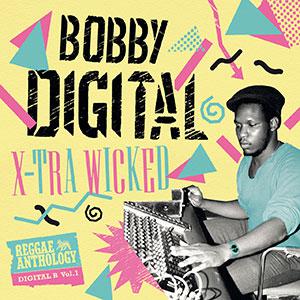 For their 'Reggae Anthology' around producer Bobby 'Digital' Dixon, 17 North Parade/VP Records really took out all the stops, resulting in not one but two boxes, each containing 40 (!) productions from Digital's archives.

Bobby had always had a predisposition for electronics and after an introduction by one of his friends soon got offered a job as a repairman at Prince Jammy's studio, where he soon grew into jack of all trades. Jammy still describes Bobby as: "...one of the quickest learning guys, (who could) do everything just like myself. Bobby cut dub, mixed music and laid rhythm track as well as auditioning and voicing artists. Bobby caught on to everything so fast, I just knew he was going to be one of the best engineers in the business!". Yet it was not Jammy, but Bunny Lee who came up with the nickname Bobby 'Digital': "I was at Jammy's and whenever they got a new piece of equipment, I had to get to know it inside out and so I'd sit down and study how it worked. I was doing that and then one day I hear Striker say: "Jammy, that one there named 'Digital'!", and that was it, from that day to this day!".

Bobby's first self-produced tunes still appeared on Jammy's label, but in 1987 he introduced the now iconic yellow Digital-B logo. Some of the first singles, Shaba Ranks' 'Peanie Peanie' and Cocoa Tea's 'Lonesome Side', both over the Peanie Peanie riddim, also open the first part of this 'Reggae Anthology'. A year later Bobby opened his own studio, which is located at 6 Ron's Road, Kingston 20 to this day.

On 'X-Tra Wicked', the first part of the diptych, mostly early work from the master, neatly grouped per riddim. The first disc features, among many others: the aforementioned Peanie Peanie riddim, Real Rock (Pad Anthony's 'Shake Them Down', Cocoa Tea & Shabba Ranks' 'Love Me Truly'), Far East (Horace Andy's 'Bless You', Johnny Osbourne's 'Little Sound Boy', Shabba's 'Just Reality'), A Love I Can Feel (Sanchez' 'I Can't Wait'), Cherry Oh Baby (Mad Cobra's 'Tek Him', Tony Rebel's 'Sweet Jamaica'), of course all re-recorded in a "digital" style and fashion. A name that certainly jumps out is that of Shabba Ranks, who features in six of the twenty tracks on the first disc, and who's early dancehall tunes definitely helped to pave the way to the success for the newly established Digital-B label. His 'It's Just Reality' album (VP Records/Digital-B, 1990), which featured many of the songs he recorded for Bobby, were also rumored to be the source of inspiration for the reggaeton genre, as Panamanian deejay El General recycled several of the riddims to voice over in his native Spanish. The second CD opens with 'Sitting In The Back Seat', sweet lovers vibes over the Moving Away riddim, voiced by the somewhat forgotten Glen Ricks. And songs like Johnny Osbourne's 'Play Play Girl', Half Pint's smash 'Substitute Lover', 'Missing You Now' by Sanchez (Love Bump riddim) or Admiral Tibet's 'Keep On Telling Me' are all in the same line. The second half of the track list switches gears and features ragga artists like Daddy Scew ('Loverman'), Red Dragon ('It A Bun Dem'), Mad Cobra ('Find And Kill' over the Ba Ba Boom riddim), Bounty Killer ('Long Or Tall' over the Death In The Arena riddim) and a young Buju Banton ('Good Looking' over the Pick Up The Pieces Gyal riddim).

Where this first part is concerned, the icing on the cake is a bonus-DVD featuring a 55 minute documentary about Bobby Digital directed by Sherkan. The interviews John Massouri conducted with the likes of friends and colleagues of Dixon's like Bunny 'Striker' Lee, King Jammy, Clifton 'Specialist' Dillon, Cocoa Tea, Sizzla, Dean Fraser and numerous others, also form the basis for the liner notes that come with the box.