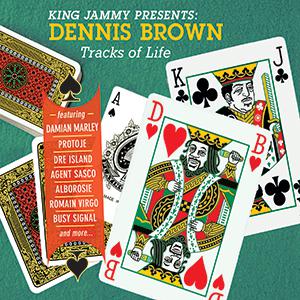 Almost 20 years after his demise, Dennis Brown remains an inexhaustible source of inspiration in the reggae genre. In 2016 VP Records already presented 'We Remember Dennis Brown', a double album full of Dennis Brown covers, and for 'Tracks Of Life', King Jammy also had a whole range of artists (from famous names like Damian Marley, Agent Sasco, Protoje, Dre Island, Romain Virgo and Alborosie, to newcomers like Aza Lineage, Projexx and Baby G) get creative with some of D-Brown's greatest classics. We certainly wouldn't call this an innovative project, even though the difference with 'We Remember Dennis Brown' mainly lies in the fact that this is not really about covers but  rather about revamps or versions of Brown's songs in which his voice can still be heard. But as long as it results in a series of catchy tracks like these, you won't hear us complain. Yours truly's favorites: High Grade Morning', a reworking of 'Joy In The Morning' featuring Protoje, 'Back To Africa', for which dub poet D.Y.C.R. and Triston Palmer did the same with 'Africa We Want To Go', for the amateurs of a good lovers tune there's 'Give Love A Try', Projexx' version of Brown's 'Give Me Sweet Loving' over the Truly riddim, or 'Real Love', in which Aza Lineage does the same with 'Now And Forever', and finally there's 'How Long', the absolute cherry on the cake, in which veteran deejay Josey Wales does his thing with 'Them Fight I'. Fifteen track party with a nice cover featuring Brown as the ace of hearts and Jammy as the ace of clubs!