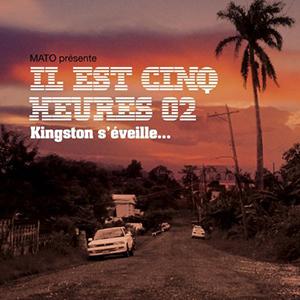 With the release of 'Il Est Cinq Heures Kingston S’Eveille...' in 2006, Makasound came up with a unique concept album: producer Mato asked a number of well-known and lesser known French reggae artists to give a famous song from French chanson a reggae adaptation and with 'Il Est Cinq Heures Kingston S’Eveille... 02' there's now a follow-up to that compilation. Where the first album still focused on chansons from the nineteen seventies, on part two it's time for the eighties. Mato also tried to stick to these eras from a reggae point of view: where the songs on part one had a classic roots reggae vibe, then the tracks on this second part clearly reflect the digital revolution of the 1980s. Belgian note on this collection is Saï Saï's reggae version of 'Ca Plane Pour Moi'; once upon a time a big hit for Plastic Bertrand but of course the brainchild of Lou Deprijck (Lou & The Hollywood Bananas, Two Man Sound).