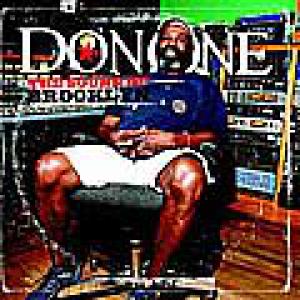 Something that keeps fascinating yours truly in the reggae genre is the fact that one can still discover new things even after many years. It was in that light, and to our own bewilderment, that we had to admit never to have heard of Donald and Sonia Moodie's Don One Records label. Sonia already took her first steps in the music business at the age of sixteen, when she started working at Studio One, the legendary studio owned by her brother-in-law Clement 'Coxsone' Dodd, and Donald still worked for the label of Stranger Cole for a while. After relocating to New York the couple first opened Coxsone's Music City, and when that closed opened their own Don One studio on Albemarle Avenue in Brooklyn. For this compilation Don Moodie collected 12 tracks by artists like Luciano, Yami Bolo, Horace Andy, Ken Boothe and Glen Washington and added an equal amount of dub versions. The track list of 'Don One: The Sound Of Brooklyn' turns out to be a combination of successful covers like 'Betcha By Golly Wow' (originally a soul hit by The Stylistics, but here in a version by Luciano) or 'Because I'm Black' (on this compilation available both in a version by Ken Boothe and J.D. Smooth, but originally by Syl Johnson and given the recent racial tensions in the US, a song giving the listener goose bumps in no time) with reworkings of popular riddims like Drum Song (Glen Washington's 'Heart Of The City'), Java (again Glen Washington, this time with 'Nah Give Up') and a bunch of riddims from Sly & Robbie's Taxi-label (Sponji Reggae, Guess Who's Coming To Dinner, General Penitentiary) on this compilation mainly performed by a Yami Bolo at the top of his game. Add to that a second disc filled with wicked dub versions and you end up with one of the catchiest compilation albums we had the pleasure listening to this year. A massive big up to Don Moodie and his Don One label only seems fitting!