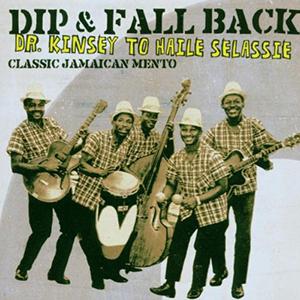 Asked about the roots of reggae most people will answer: "ska!" and others might even remember nyahbinghi. Unfortunately, those answers are close but no cigar! Already in the nineteen thirties, genres like calypso and mento ruled the Caribbean. Because of the colonial past of the islands, these traditional genres will often be overlooked. In music-historical perspective both genres have however been pivotal in their influence on the sound and content of contemporary Jamaican music. Both emerged from the inherited music traditions of the African slaves and differ only in instrumentation (the calypsonians use the steel drum, a modified oil barrel, mento musicians the rumba box, a magnified version of the African thumb piano). With 'Dip & Fall Back: Classic Jamaican Mento' Trojan finally brings homage to long-forgotten musicians like Lord Lebby, Mary Bryan or Count Owen. The double album contains treasures like 'Dr. Kinsey Report' (on the sensational report of Dr. Kinsey about human sexuality), 'Tomato' (the oldest version of the song made popular by Phyllis Dillon as 'Don't Touch Me Tomato' and one of the first songs that Bob Marley sang to his mother as a young lad) and 'Ethiopia' (originally recorded in 1958 and the earliest known song with references to the then still as outcasts regarded Rastafarians and their desire to return to Africa). For those wanting to understand Jamaica and its music traditions fully, the music on this compilation is the foundation!