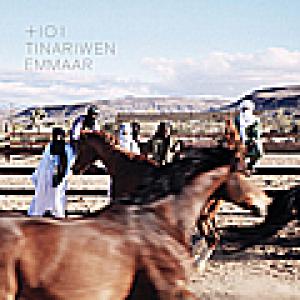 We're still unconditional fans of their desert sound, but allowed to play devil's advocate for a second we do wonder how many Tinariwen albums a person really needs. Now that is out of our system, we can tell you that we were quite taken with the rather up-tempo 'Emmaar'. Of course a solid Tinariwen album needs to be recorded in the desert, but because of the unstable political situation (early 2013 guitarist Abdallah Ag Lamida was even detained for a while by Ansar Dine, the Islamic fundamentalist militia terrorizing the region) their home base Kidal in the North of Mali was not an option this time, so the band members travelled to the US to pitch their tents in Joshua Tree, California where they were joined by a number of American musicians like Red Hot Chile Peppers guitarist Josh Klinghoffer, Matt Sweeney of rock band Chavez and hip-hop poet Saul Williams.