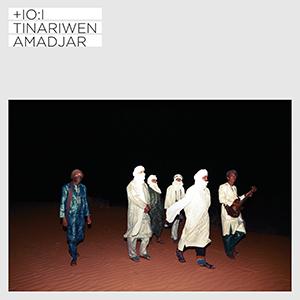 The story behind 'Amadjar' (Tamasheq for "unknown visitor") started in October of 2018 at the Taragalte Festival for nomadic cultures in the Moroccan Sahara. After their set at the festival, the members of Tinariwen immediately drove on to Nouakchott, the capital of Mauritania, an almost two week journey. Every evening the caravan halted somewhere and under the beautiful starry sky the various musicians started to work on the foundations of this long-player. Having reached their destination, they took to the Mauritanian desert accompanied by Moorish griot Noura Mint Seymali and her husband, guitarist Jeich Ould Chigaly. All the songs on 'Amadjar' were recorded in several takes without added effects in a large tent by using the camping car of the French production team, which was converted into a mobile studio. Although contributions by Western musicians like Bad Seeds violinist Warren Ellis, mandolin and charango player Micah Nelson (son of country legend Willie Nelson and guitarist in Neil Young's band) and guitarists Stephen O'Malley, Cass McCombs and Rodolphe Burger were added afterwards, it won't surprise you if we say that on this album you can almost taste the desert and the sound of this legendary Tuareg band unfolds in its most fragile and purest form.