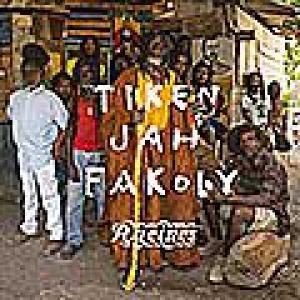 After 'L'Africain', 'African Revolution' and 'Dernier Appel', albums which signaled a return to his African roots, for 'Racines' Tiken Jah Fakoly returned to Jamaica where he once again collaborated with Sly & Robbie (see also 'Françafrique' and 'Coup De Gueule'). For this album Tiken selected some of his favorite tracks from reggae history and gave them, sometimes with the vocal assistance of colleagues like Ken Boothe, U Roy, Max Romeo and Jah9, an African makeover; an exercise that works better for some songs then for others. Tiken's kora and balafon based rendition of Alpha Blondy's 'Brigadier Sabari', a song indicating things between Alpha and Tiken have definitely settled down, is our favorite from the track list and Fakoly's versions of Buju Banton's 'Hills And Valleys', Bob Marley's 'Zimbabwe' and Peter Tosh's 'African' also sound convincing. 'Fade Away', here in duet with Jah9, yours truly found just a tad too short and Tiken's version of Burning Spear's 'Christopher Columbus' also couldn't quite convince yours truly. Taking into account the racially charged police incidents in the US, that seemed to be the order of the day in recent months, opener 'Is It Because I'm Black?', originally a stirring soul song by Syl Johnson, but catapulted into reggae history by Ken Boothe, suddenly sounds all too real. The fact Fakoly even managed to convince Ken Boothe to rerecord the song with him, is the absolute icing on the cake. Successful African-Jamaican cross-over cover album.