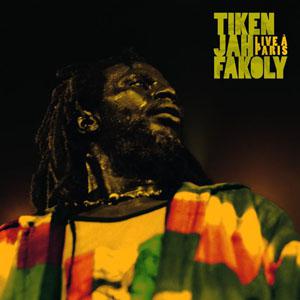 Tiken Jah Fakoly is rapidly becoming one of the most important reggae artists in the world. Just in the past twelve months he performed no less than four times in this country, a feat no other reggae act will accomplish. For those who for some inexplicable reason still haven't seen him live, there's now 'Live À Paris', a recent concert registration in one of France's most important and best known concert temples, Le Zénith. Tiken Jah is a perfectionist and this release is once again proof of that as you can purchase 'Live À Paris' in no less than three different versions: for the traditionalists, there's the CD version (already an instant classic in the genre in itself), then there's also a live DVD of the same concert with some video clips of Tiken's recent hits thrown in as a bonus and finally, for his hardcore fans, there's a limited collector's edition offering a registration of Tiken's first concert in his native Ivory Coast after his exile in Mali and two documentaries on the political situation in Ivory Coast.