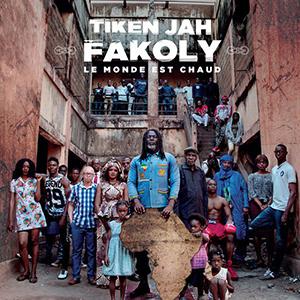 With 'Le Monde Est Chaud', a title referring both to the literal warming up of the earth and the ecological disasters that come with it, and to the current global political climate in which one conflict follows another, Tiken Jah Fakoly returns to his roots. Gone are the (sometimes lamentable) covers of reggae classics, and, apart from a few lines in 'We Love Africa', all English seems to have been replaced by French and Dyula again. For the production of the album, this time Fakoly joined forces with young Ivorian producer Akatché. Fortunately, the traditional West African instruments (Petit Condé - Mandinka guitar, Mamadi Diabaté - kora, Adama Keita - kamalengoni, Kouyaté Alkao - ngoni, Adama Sidibé - soku, Yaya Sangaré - djembe & doundoun) and Fakoly's engaged lyrics, in which he warns his African brothers of the dangers of a flight to Europe ('Pourquoi Nous Fuyons', 'Libya'), talks about the exploitation of the African continent and the corruption it goes hand-in-hand with ('Ça Vole') or even goes ecological (title track 'Le Monde Est Chaud', a duet with French-Comorian rapper Soprano, the only vocal guest Tiken invited for this album, 'Ecologie'). Our personal favorites from the track list? The up-tempo 'Kodjougou' (rich or poor, money always causes problems) and 'Ngomi', in which Tiken presents himself as a defender of the people against the corrupt rich elite. With 'Le Monde Est Chaud', Tiken Jah Fakoly returns to form, reminding why we became big fans of his in the first place!