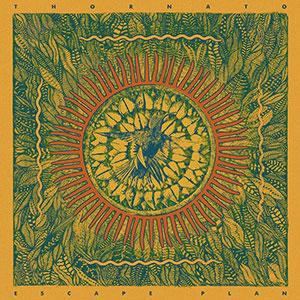 Yours truly got to know Swedish producer Thor Partridge aka Thornato only recently thanks to his contribution on Captain Planet's 'No Visa' album. 'Escape Plan' is the man's second full-length album after 2017's 'Bennu'.

Partridge grew up in Sweden surrounded by traditional sounds from Greece, the Caribbean and Africa, and is classically trained in guitar and piano. After moving to the United States, he couldn't avoid the dancehall, hip-hop and salsa on the streets of The Big Apple, and in order not to stick to mere theoretical knowledge, Thornato made trips to, among others, Mali, India and Colombia, often making field recordings of local musicians on the spot: "I was always interested in having a balance between more organic sounds and pre-recorded sampled sound. I kept audio journals, I recorded conversations, I just wanted to record those special moments.  I kept folders and folders of that stuff on my hard drive. Music has always been the centerpiece of it. As long as there is soul and connection, the recordings will carry themselves.".

As for the title of this new album, Thor states: "I feel like I've lived in the city my whole life. As I've gotten older, I've noticed I've become really rundown by the congestion, the pollution, the concrete. I was born in rural Sweden, I feel like the core of who I am really resonates with nature and so when I was doing the album, I was thinking so much about my physical and philosophical escape plan. I think it was a tension within me, and really wanting to bust out and that energy led to the tunes just coming out unconsciously better for the dancefloor.".

For this album Thornato collaborated with, among others, Mexican electro-world band Sotomayor (brother and sister Raul and Paulina Sotomayor, who can be heard in the techno-esque 'La Niña Grande'), Ghanaian singer and producer Zongo Abongo, British Latin-folk minimalist El Búho (accompanied by KarenBe in the Oriental electro fantasy 'Ya Hawa'), Ecuadorian marimba virtuoso Benjamin Vanegas (featured in the excellent 'Mama Clo') and American-Guyanese singer and rapper (Jahdan) Blakkamoore (the dancehall meets hip-hop of 'The Fairest').

But equally interesting are Thornato's instrumental compositions like the digital Peruvian cumbia or chicha of 'Out Here' or the psychedelic cumbia of 'Break Away', absolute highlights from the track list as far as we're concerned.

Just like Planet's 'No Visa', 'Escape Plan' is a fascinating transcontinental musical kaleidoscope!