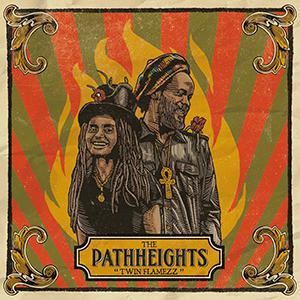 The PathHeights are Jamaican-German singer-songwriter and producer duo Akosua Aset and Aumuna. Akosua, of Jamaican descent, grew up in Schleswig-Holstein, Germany, and began writing rhymes and poetry while still in high school, influenced by artists like Linton Kwesi Johnson, Jill Scott, Floetry and Saul Williams. In 2007, together with Elsa M'bala, she formed acoustic poetry duo Rising Thoughts and toured Germany, but in 2011 Akosua decided to travel to Jamaica where she soon bumped into Aumuna. Aumuna was born in Saint Ann, grew up in Point Hill, a small community in Saint Catherine, and later moved to Portmore. The duo performed a number of times in Jamaica, but in 2013 Akosua decided to return to Germany, taking Aumuna with her. In 2015 The PathHeights returned to Jamaica to record their nine track debut EP 'Ninth Ether', and with 'Twin Flamezz' the duo now presents a successor. In the track list 4 new songs - in that typical acoustic style with percussion and acoustic guitar in leading roles - and as many dubs and remixes (including an iLLBiLY HiTEC remix of 'Like You', a song that could originally be found on 'Ninth Ether'). The name of the band is a play on words that refers to Ptahites, spiritual, creative beings who want to convey a collective conscious message and are adherents of the philosophy of origin as found on the Shabaka Stone (is a relic incised with an ancient Egyptian religious text, which dates from the 25th dynasty, also known as the Nubian Dynasty or the Kushite Empire, referring to Ptah, the patron god of craftsmen, metalworkers, artisans, and architects as a creator-god, a divine craftsman of the universe who was responsible for all existence). Excellent calling card by an original duo you should definitely keep an eye on!