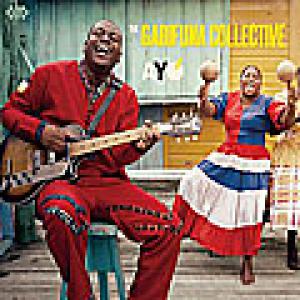 It's already been just over five years since Garifuna figurehead Andy Palacio's early demise. The fact his sudden death left the rest of his band members orphaned needs little argument, but The Garifuna Collective didn't resign themselves to faith and now present us with 'Ayó' ("goodbye"), an album that was conceived to a large extent as a tribute to Palacio (both opener 'Ayó' and closing track 'Seremei Buguya', roughly translated: "thanks to you" or "because of you", are odes to the man). Simply replacing Andy was not an option, so the band worked with different vocalists with Lloyd Augustine perhaps best suited to fill Palacio's shoes. Sadly, Andy Palacio is not the only member The Garifuna Collective had to deplore in recent years, as percussionist Giovani 'Ras' Chi and vocalist Justo Miranda also passed away. Chi made the local news when he was shot during a bicycle ride and Miranda still wrote the lyrics to the album's closing track 'Seremi Buguya', in which he observes: "…but at least you went out like a king. When I die, not many people will care.". Ironically Miranda died of a heart attack sitting under a tree somewhere in Honduras, the other band members finding out about his death only weeks later! Those who already liked the albums by Andy Palacio and Aurelio Martinez will also enjoy 'Ayó'. One of the world music picks for 2013!