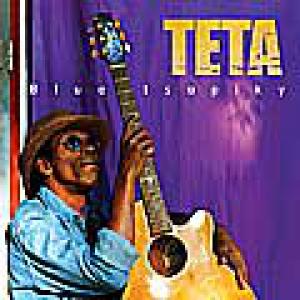 Claude Teta is a singer-songwriter from Ampanihy, a small town on the road between Toliara and Fort Dauphin in the southern part of Madagascar. Teta grew up in a family of traditional musicians and already at the age of 8 learned to play the mandolin (even though his true love would become the guitar). After several failed attempts at starting his own band, in 2007 Teta decided to pursue a solo career instead. On 'Blue Tsapiky' (the title is a reference to tsapiky, like salegy, energetic dance music that evolved from traditional music from the region surrounding Toliara with a guitar style inspired by traditional marovany compositions, but just as well featuring influences from South African township jive; the genre now also incorporates Western instruments like the electric bass, electric guitar and drums) Teta in a virtuous way plays complex yet often intimate arrangements in which he interweaves the traditions of his home country Madagascar with influences from blues (title track 'Blue Tsapiky') and South African township jive (opener 'Inay Karay Inay'). Intimate Malagasy gem!