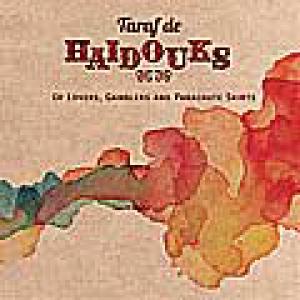 With 'Of Lovers, Gamblers And Parachute Skirts', Taraf de Haïdouks, until further notice the most important exponent of Romanian lautari culture, celebrates its twenty-five year existence. The founding members of the band (Ion Manole, Neculae Neacsu, Cacurice and Ilie Iorga) have sadly all passed away, but a whole new generation is ready to uphold the banner of Taraf de Haïdouks: Tsagoi is Neculae's son and Gheorghe Manole is Ion's. For this album the band also collaborated with the flamboyant singer Viorica Rudareasain again, with whom they'd already recorded the iconic 'Dumbala Dumba' in the past. On 'Of Lovers, Gamblers And Parachute Skirts', the taraf serves both the traditional Romanian gypsy ballads and love songs they built their reputation on, but also more modern manele and the Turkish-influenced instrumentals they are so fond of themselves. For those of you wondering about the meaning of the album title: opener 'Balalau From Bucharest' is about a musician with a reputation for gambling and starting brawls, 'Clejani Love Song' is a fresh interpretation of a traditional love song from Clejani, the hometown of the band, and 'I've Got A Parachute Skirt' is a naughty song in which a woman complains about the long absences of her husband and openly admits to being ready to allow other men a peak under her petticoat. Excellent addition to the discography of this iconic Romanian band!