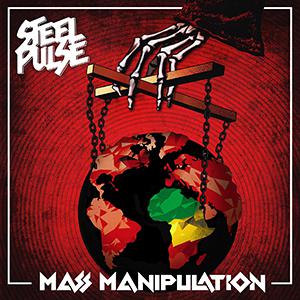 Fifteen years after their last album, 2004's excellent 'African Holocaust', Steel Pulse finally returned to the studio for 'Mass Manipulation'. As far as original members are concerned, the band from Birmingham in the United Kingdom has been reduced to vocalist/keyboardist Selwyn Brown and front man and lead vocalist David Hinds, but the duo has been surrounding themselves with seasoned musicians for years, so on 'Mass Manipulation' there's definitely no need to worry about that typical Steel Pulse sound.

Even after more than four decades Steel Pulse remains its militant self with songs about various hot topics like the persistent police violence that continues to hit the black population of the United States ('Don't Shoot') or 'Justice In Jena', which refers to the case of the so-called Jena Six, six black youngsters who in 2006 were initially accused of manslaughter after the beating of a fellow student. The incident followed a number of racist incidents at the local Jena High School, where only 10% of the pupils are black. The situation escalated after a black student and some of his friends dared to sit under the so-called "white tree", a beloved gathering place for the school's white students. The next morning, a number of nooses, the symbol for the lynching of blacks, were found attached to the tree. The situation escalated, resulting in the beating of 17-year-old white student Justin Barker. The way in which the six were dealt with by the judicial authorities generated a great deal of public protest, which in September of 2007 culminated in a major march against racism in Louisiana with 15,000 to 20,000 participants.

There's no easing off as in 'Human Trafficking', in which the band deals with the heavy topic of human trafficking, especially the kidnapping and selling of minors, quite the hot topic in the light of the case of American millionaire Jeffrey Epstein who committed suicide in his cell at the beginning of August 2019 after having been arrested on suspicion of human trafficking and of the sexual abuse of underage girls. 'No Satan Side' is about the continuous exploitation of the African continent by Europe, China and the United States, unable to resist the temptation of natural resources like coltan, gold, diamonds, copper and uranium.

Opener 'Rise' reminded us of 'Islands Unite' from 'Vex' (MCA Records, 1994), and with 'Stop Your Coming And Come', which opens with 'Amesegenalhu!', a thank you in Amharic to "motherland" Ethiopia, David Hinds calls on his Rastafarian brothers to stop talking about repatriation and actually put the concept into practice.

Slightly lighter in tone is 'N.A.T.T.Y', an ode to dreadlocks, transformed by Steel Pulse into the acronym Natural And True To Yourself. As the title makes clear, 'Black And White Oppressors' floats on the old creed of the Nyahbinghi movement: "Death to Black and White oppressors!" and for 'Cry Cry Blood' Hinds drew inspiration from the events at Pinnacle, the first self-sufficient Rasta commune founded by Leonard Howell, that was almost completely destroyed in 1954 after a raid by soldiers. Two songs with a very similar content are title track 'Mass Manipulation', about the manipulation of press and social media by dark forces (beautifully illustrated on the sleeve of the album with an image of the bony hand of the Grim Reaper manipulating the earth as if it were a puppet on a string) and 'World Gone Mad', in which the band lists a number of catastrophic trends, ranging from global warming and the immense plastic soup we have created, over religious fundamentalism and terrorism to the global refugee crisis, human trafficking and the resurgence of slavery, ending in the ominous sounds of a major explosion and resounding alarms.

Just before closing track 'Nations Of The World', king of bring the album full circle, we still get 'Higher Love (Rasta Love)', a poppy reggae cover of Steve Winwood's 1986 world hit (in which David's son Baruch raps a few lines) but wasn't immediately our cup of tea.

With 'Mass Manipulation' Steel Pulse is back from never having been away!