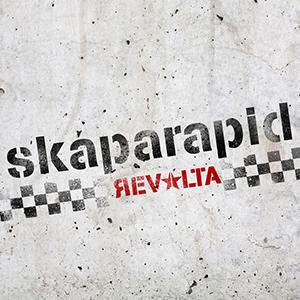 Skaparapid is a Spanish ska-punk formation founded in 1993 at the Kasal Popular, the headquarters of the Valencian squatters' movement Movimiento Okupa , who, with their anti-militaristic and anti-fascist repertoire ('Kolors') and the combination of the male and female voices of Josep, Dani and Carmen, mainly enjoyed popularity in Spain and Latin America. In 2007 the band members decided to call it a day, but recently the old itch to play together flared up again and now there is this 'Revolta' (Catalan for "revolt", in the sense of an uprising, but in this case also "rise from the ashes" or "returning"), a compilation album with twenty of the band's most popular songs and their fans' favorites. Opener 'Donant La Kanya' (loosely translated: "Give them cancer!" and also the opening track on the untitled demo cassette the band released in 1995), still starts out fairly innocently with the sound of a fairground organ and some jazzy sax playing, but after about half a minute explodes into sturdy ska with a raised middle finger to the state. The tone has been set, and with songs like 'Ska En El Vito', 'Amor Sin Odio' (from 'Que Empiece Ya!', the band's official 1996 debut album) and 'Sharp Ska' (the acronym S.H.A.R.P. stands for Skinheads Against Racial Prejudice) Skaparapid continues in the same energetic vein. That being said, here and there they slow the pace down a bit for more reggae-flavored songs like 'Abajo En El Sur' or 'Que Trabaje El Rey'. Then there's 'Konfesión', starting out as a laidback tango, but then bursting into sturdy ska and punk, 'Dime, Dime' is reggae meets rap metal, and for 'Argentosis' the band even goes bossa nova. If you don't speak Spanish and/or Valencian, Skaparapid's socio-critical lyrics will unfortunately pass you by, but what's left is still highly contagious and energetic ska-punk from a band definitely worth discovering. Or as they prefer to put it: "Skaparapid por siempre, cabron@s!"