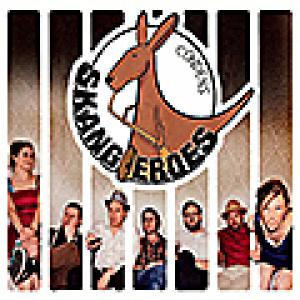 For yours truly the Belgian ska-scene remains largely uncharted territory, and thus we weren't familiar with Skangoeroes, a seven-piece band from Halle already active since 2005. The different band members all earned their spurs playing with bands like The Concrete Coconuts, Shaman Festival and The Jammin' Troopers. Skangoeroes started out as a regular 2Tone band, but gradually influences from other genres also started to seep in the band's repertoire. On 'Condens' ("condensation") lead vocalist Veerle Slootmans alternates between Dutch ('Water', of which there's also an acoustic version in the track list, 'Wani Magni', 'Wow'), Spanish (opener 'Alternativo', 'Harta', hinting at Buena Vista Social Club's 'Chan Chan') and French ('Marcia Baila', a cover of the Les Rita Mitsouko song), together with her band mates creating a musical universe you should situate somewhere between Flemish singer-songwriter music and musica mestiza. 'Condens' contains 7 vocal tracks and 2 instrumentals ('Off The Reel' and 'Dub The Reel') leaving the listener longing for more, but with this album Skangoeroes none the less provides a ray of sunshine in the darkest period of the year.