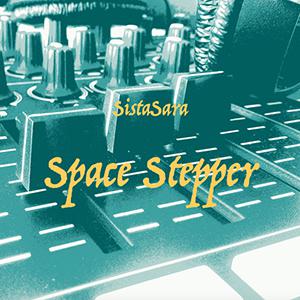 Yours truly got to know Italian-Nigerian Sarah Fugue aka SistaSara back in 2017 thanks to her self-released 'Creation' album. For 'Space Stepper' she joined forces with the Cypriot Dub-O-Phonic label, and this 5 track EP is meant as a foretaste for her soon to be released 'Universal' album. 'Space Stepper' opens with title track 'Illusions Space Stepper', a dub cut of 'Illusions Of Time', a track you'll be able to discover on 'Universal', and 'Altered Dimensions' is also a minimalist version of that same song. Before she settled in Oakland, California, Sara spent a few years in London where she was strongly influenced by the local dub scene. Much more than on predecessor 'Creation, those influences from UK dub can be heard in the songs on 'Space Stepper', especially in the instrumental 'Troughout' and dub version 'Throughout Space Dub'. Closing track 'Isaiah' is a hypnotic, meditative dub ode to Isaiah, one of the most important prophets of the Old Testament. As Dub-O-Phonic label boss Savvas Thomas summarizes: "Hypnotic dub with a psychedelic touch!"