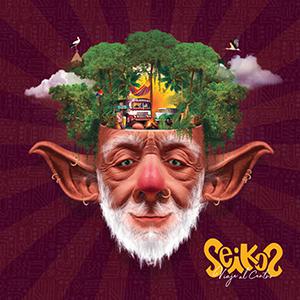 Seikos is a nine-piece band founded in Sant Feliu de Llobregat, a municipality near Barcelona back in 2014. Alternating between Spanish and Catalan, the band presents a solid festive mix of ska-punk and reggae. They describe their musical mission as: "...to get people to take a moment to think only of themselves and disconnect from the frantic and non-empathic society surrounding us, by making them dance and have a good time.". With 'Estrictament Personal', the band already released a first EP in 2017, now followed by this debut album 'Viaje Al Centro' ("journey to the inside"), for which Seikos invented an imaginary gnome, over the course of 11 songs trying to give the listener more self-awareness, ranging from title track and opener 'Viaje Al Centro', about being aware of your inner self and attempting to fill it with as much magical moments as possible, over '¿Quienes Somos?, with the band pointing out that it might be advisable to take a moment once every so often to reflect on the path we've take in our lives, and question whether the direction we've taken is the right one, to the importance of always being yourself in closing track 'A La Que Cuente Tres'. Anyone wondering about the meaning of the band's name, we'll have to disappoint somewhat... Looking for a suitable name, at the time the band turned to Google Translate, experimenting with translating a number of terms from Spanish and Catalan into Basque. That's how they arrived at Seikos, which they wrongly assumed was the Basque term for "madmen", but in fact simply has no meaning as it doesn't exist (that being said, with a bit of good will one could read it as a phonetic corruption of the English term "psycho's").