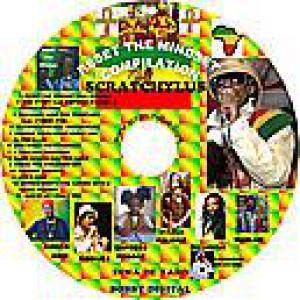 Scratchylus Rhyme was born Sene Jameh in the London Harlesden district, but moved to Jamaica a few years ago. For 'Reset The Mindset' the singjay collaborated, among others, with Sizzla, Bushman and Kiddus I and during live shows he's often backed by musicians of Earl 'Chinna' Smith's Inna De Yard project. Scratchylus' daughter Empress Reggae is also featured on the album, proudly performing in a reggae meets dub poetry parlando reminiscent of Mutabaruka ('Our Story', 'Who Built The Pyramids'). Stylistically, Scratchylus constantly flirts with the golden age of reggae. Some tracks are a reminder of nineteen seventies roots (the beautiful title song 'Reset The Mindset' over the Hot Milk riddim, Gregory Isaacs' 'Slave Master' featuring Ras Marlon, Dennis Brown's 'A True' with Bushman), while other songs are inspired by early nineteen eighties dancehall ('She's Mine', a nice version of Michael Jackson's 'The Girl Is Mine', which Scratchylus transformed into: "The dancehall girl is mine...", or 'Choose Your Lover Right', a reworked version of Alton Ellis' 'Too Late To Turn Back Now'). His rather eccentric stage outfits (colonial pith helmet, costumes featuring ankh-signs) are also inspired by an era when reggae artists dressed slightly more colorful (e.g. Steel Pulse). The great tracks on 'Reset The Mindset' quickly make up for the rather horrible album cover.