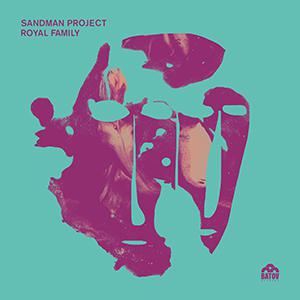 For Sandman Project, Israeli guitarist Tal Sandman surrounded herself with a number of befriended and like-minded musicians. Sandman summarizes the project as follows: "Listening to music from different cultures and styles gives birth to creation. It's like assembling a puzzle made of recycled, scattered pieces, and there are endless ways of connecting each piece to create a brand new, beautiful image". On the one hand, Sandman's picking guitar technique is influenced by the way instruments like the oud or the bouzouki are strummed, but the vibrato she manages to conjure out of her instrument is more akin to oriental instruments like the sitar or sarod. On this 5 track 'Royal Family' EP we mostly heard compositions inspired by Ethio-jazz and Tuareg rhythms like the highly enjoyable opener 'Hamsa' (also called the hand of Fatima, a protective hand shaped amulet, originally from the Middle East and North Africa, but is also getting more and more popular in Western Europe) or 'Circles', in which the various instruments in the band (apart from Tal Sandman's guitar, also the excellent trumpet sounds of Tal Avraham, the bass of Shay Hazan and the drums of Haim Peskoff) given all the space they require. More than successful debut from a band you should definitely keep an eye on!