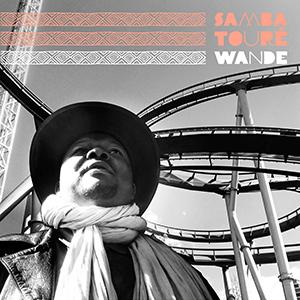 When Malian singer and master guitarist Samba Toure started working on 'Wande' ("the beloved"), he had a clear vision of where he wanted to end up with this album, but once the recording sessions were over, little remained of those initial plans: "We had a totally different album in mind, a return to something more traditional, almost acoustic. I think this album is less dark than the previous ones. It has some sad and serious songs, but it sounds more peaceful. All the first takes have been kept, I didn't re-record any guitar lines, the first takes are the ones you can hear on the album. There are less overdubs than in previous albums, we didn't try to polish or make anything perfect, it gives a more natural feeling.". The whole album was recorded in a period of about two weeks: "One of the main difficulties we have in Mali is to reunite everyone at the same time. Every young musician plays in at least three bands or has a side job; only a few musicians in Mali can live from music, and have to work, so they are always busy. For the most part, I recorded the guitars first, then came percussion and bass. The solid ngoni and guitar duels from the predecessor 'Gandadiko' have disappeared and instead we get deep, slow bluesy grooves (the only exception in the track list is 'Yerfara', which sounds a bit more energetic than the rest of the tracks on 'Wande'). Samba had only two songs ready before he went into the studio: title track 'Wande', a declaration of love to his wife, and 'Tribute To Zoumana Tereta', an ode to the sokou or njarka virtuoso who passed away in May of last year, and with whom Touré often collaborated. Samba also used a sample of Tereta's work, so his spirit literally lives on through the song. The tama (talking drum) was also given a more prominent role on 'Wande': "I've always loved tama, for its sounds, it's the only drum that can play eight notes. It's so energetic. And I love tama for its symbol, its tradition. Before cellphones, when something important happened in a village, people would reunite on a place by the call of tama player. It's a symbol of call to reunion.". Normally we would describe 'Wande' as a more than excellent desert blues or Mali blues album, but according to Samba those descriptions are a sign of journalistic laziness, so for this time we'll call it essential Malian listening incorporating influences from both the work of godfather Ali Farka Toure as well as rock hero Keith Richards.