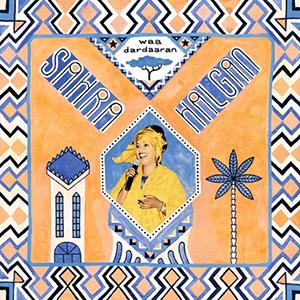 Sahra Halgan is a diva from Somaliland, the state that tore itself away from civil war-torn Somalia in 1991, but for one reason or another is not recognized by the international community. Sahra got the nickname 'Halgan' ("the warrior") thanks to her courageous efforts during the revolution against dictator Siad Barre in the 1980s, when, for a while, she was active as a nurse and performed to encourage the revolutionary troops.

Like so many other Somalis, Sahra eventually ended up a refugee in Europe, where, together with percussionist Aymeric Krol (BKO) and guitarist Maël Salètes (Orchestre Tout Puissant Marcel Duchamp), she founded the Sahra Halgan Trio in 2010, a collaboration producing 2015's 'Faransiskiyo Somaliland'.

In 2013 Halgan decided to return to her birthplace Hargeisa, the capital of Somaliland, in order to realize a long cherished dream and thus contribute to the reconstruction of her country: the creation of a place dedicated to music and poetry called Hiddo Dhawr ("keeps the culture alive"). And now there's this 'Waa Dardaaran' (a Somali courtesy formula to appeal to high placed dignitaries), once again recorded with the assistance of Aymeric and Mael, but this time supplemented with keyboardist Graham Mushnik and released by Buda Musique under her own name.

In the track list a mix of new songs ('Alaah', 'Hiddo' and 'Dardaaran'), the Somali traditional 'Durdur', and classics from the golden age of Somali music (opener 'Kiidhaba' and 'Talo' are classics by Somali singer Halima Khaliif Omar, better known as Magool, Somali for "flower", 'Talo' was a hit for diva Kinsi Haji Aden, and 'Massalo' and 'Desha Deshu' were originally recorded by Khadra Dahir). On 'Waa Dardaaran' Sahra mainly sings about the different facets of love (opener 'Kiidhaba', 'Talo', 'Durdur', 'Caaqil', 'Massalo'), but at the same time she calls on political leaders to take their responsibilities (title song 'Dardaaran') and in 'Hiddo' expresses her gratitude for the hospitality France showed her as a political refugee while at the same time declaring her love for her motherland.

Exciting piece of Somali funk that's exactly up our alley!