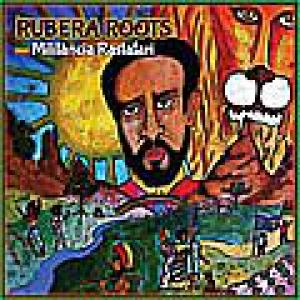 We don't often get served a portion of Portuguese roots reggae and so we were a little curious about this long player debut from Rubera Roots, a band from Amadora near Lisbon (the band's name is a reference to the subsistence lifestyle of the farmers in Cape Verde, analogous with the Rastafarians in Jamaica). To yours truly 'Militancia Rastafari' sounded somewhat reminiscent of the music of Brazilian band Jamaica Groove. That's certainly to do with a shared use of the Portuguese language, but musically there are also similarities (to give you but one example, in 'Jah Rastafari', like in many of the songs from Jamaica Groove's debut 'Mãe Terra', you can hear the mesmerizing sound of a flute). That being said, besides a single Portuguese (André Moraes - keyboard) and an Angolan (Ras M - drums), the line-up of Rubera Roots mostly consists of Cape Verdeans (Rasnunukah - vocals, Raskamarah - guitar and Jahson - percussion) and in addition to Portuguese you can also hear Cape Verdean Creole on 'Militancia Rastafari'. For the beautiful guitar solo in 'Larga Tudu Bu Ben' the band invited Virgin Island-guitarist Tuff Lion. Those among you who like slow spiritual roots reggae, will surely fall for the charms of Rubera Roots. The album even has a slight Belgian touch, as for the mastering producer Ziggy Blacks called on our very own Marc 'MacLes' Leys. Discovery!