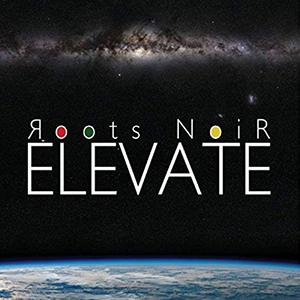 'Elevate' is the second long player by Canadian one-man project Brian Bataille aka Roots NoiR. Always more of an amateur of classic rock, Brian only discovered the reggae genre in 1990, thanks to a mix-tape full of Wailers songs from the band's Lee Perry period. Bataille was so inspired by what he heard, he promptly started writing himself. That being said, the accompanying music only came about years later, when he purchased a Roland XP-50 synthesizer and taught himself to play guitar and bass. Brian recorded a few songs, but that's as far as things went at that stage. However, in 2012 Bataille moved to Vancouver and through Craigslist found a number of like-minded souls with whom he founded Railtown Sound System, a band that lasted for five years and was even on the brink of recording a first album before things fell apart. Brian decided to soldier on and continued to work on his songs in the studio by himself. In 2017, this yielded 'Human Nature', a first album he released under the pseudonym Roots NoiR, now followed by successor 'Elevate'.

For Brian, reggae is clearly message music, something which becomes immediately clear when you listen to the lyrics of the songs on 'Elevate'. Opener 'Any Difference Will Do' talks about the fact that if haters want to oppress you, they'll always find a reason to rationalize their actions. Title track 'Elevate' offers the listener a simple choice: we can either elevate people or bring them down in our everyday interactions with them. Even more serious is 'Blood Stone aka To Soon For Sorry', in which Bataille criticizes the persistent racism in our society, and rightly states that it is far too soon to simply say: "Sorry for everything!". The rootsy 'A Matter Of Fackt', on the other hand, is about social inequality in capitalist society. That he can also handle a love song, Bataille proves with the upbeat 'All To Easy', and 'All That You Are', a duet with Maggie Zustovic. In the same vein, but with some slight punk influences, is 'Adventures In Vegetable Debauchery aka Bright Eyes', the misadventures of a guy who tries to save a woman from prostitution, but eventually gets saved himself and falls head over heels in love with the lady in question. We then go dub for 'Dub N', one of our favorite tracks on 'Elevate'. Also instrumental, but a bit of an odd one out in the track list is the funky 'Funk 'n' Skankin', and 'I Wonder Who', in which Brian wonders what an ideal future love might look like and if it’s even possible. Bataille concludes with 'Dub Stone aka Too Dub For Dubby' and 'A Matter Of Dubt', excellent dub versions of 'Blood Stone' and 'A Matter Of Fackt'. If we hadn't known better, after listening to this album we'd probably have suspected it to be a reissue of an old 2 Tone release (opener 'Any Difference Will Do', title song 'Elevate', 'All Too Easy'...). Yes, this is white man's reggae, but of the better kind.