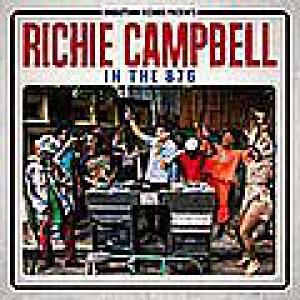 For 'In The 876', Richie Campbell, the Portuguese answer to Gentleman (something to which the singer alludes to himself in 'Feels Like': "...Gentleman step in so me a not the only white man here..."), travelled to Jamaica where he collaborated with artists like Toian, Jesse Royal and Assassin. The title of the album refers to the international access code for Jamaica and not coincidentally the intros and outros of the songs on 'In The 876' are all phone messages. Just the once Campbell brings things back to Lisbon, as for 'Knock Me Out' he invited his compatriot Sara Tavares. 'In The 876' is especially recommended to amateurs of a good lovers tune, as no less than 5 out of the 12 tracks on the album have a romantic touch, with 'Get Over You', a duet with Toian and 'Give It All Away', a song in which Campbell calls on women not to lose their dignity by immediately offering sex on the first date, tickling our imagination most. However, our favorite song on 'In The 876' is ganja-tune 'That's Not Mine', a tongue-in-cheek duet with Jesse Royal, in which both singers argue with the police the herb found isn't theirs. With 'In The 876' Richie Campbell definitely delivers!