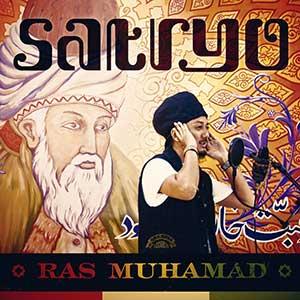 For more than three years Ras Muhamad, the Indonesian standard-bearer of reggae, worked on this successor to 2014's 'Salam', and on the album he deals with the stereotyping of Asians, explains what it means to be an Asian Muslim, and looks back on his own experiences as a reggae musician of Asian descent in the years following the release of 'Salam'.

Muhamad summarizes 'Satryo' (Bahasa Indonesia for "the knight"), thematically divided into three parts ('Awakening', 'Alignment versus Disharmony' and finally 'Ascension'), as: "My road to peace, to find completion, leaving the past behind by learning from it to become a better version of myself.".

In the first "chapter" we find, among others, 'Pistol Parabellum', originally the official name for the German Luger-pistol which became very popular during and after the Second World War, but, at the same time, also a derivative of the Latin expression "Si vis pacem, para bellum!", which translates into Dutch as "If you want peace, prepare yourself for war!". With 'Pistol Parabellum' Ras Muhamad wanted to create a song with a rifle in the title, without the content being about violence. In the lyrics Muhamad bundled his experiences as a reggae artist of Asian origin, and the preconceptions he experienced, after the release of his 'Salam' album in 2014, and the evolution he has gone through since then. At the same time, the song is intended as a tribute to the so-called "spaghetti western", a film subgenre for which Ras Muhamad always had a great fondness for.

Muhamad may be Muslim, but, first and foremost, he remains Indonesian and, apart from a Muslim majority, that country also has Christian, Buddhist and Hindu minorities. It's Hindu culture in particular that was the influence for 'Flight Of Ananta', a song in which Muhamad actually wanted to denounce the stereotyping of people of Asian origin, but which he based on the story of Ananta the thousand-headed snake from the Vedas on which the god Vishnu sleeps in the periods between the eras. The snake floats in an ocean of milk, sustains the underworlds, and at the beginning of a new era the world rests on its heads. Muhamad says he misses Asian figureheads. It's been decades since Bruce Lee conquered the world, but since then few Asian icons have enjoyed the same international appeal, even though Asian culture in all its forms has never enjoyed more popularity than it does now. As a reggae artist of Asian origin, Ras Muhamad wants to play a pioneering role and rather than just copying the Jamaican sound, tries to leave his own Indonesian mark. As if that's not enough, the lyrics of the song also include a nice verbal nod to Muhamad's own origins, but also the Augustus Pablo classic 'East Of The River Nile': "They never mention us, man from Asia, east of the River Nile, architect of yoga from the richest soil!".

With 'Al Wadud', one of the "99 Names of Allah", which translates as "the Loving One", we return to Islam, even though this song is at the same time a dialogue with the Most High and Muhamad's father who passed away in 2017. Lighter in tone is 'Bambu Keras', literally translated "hard bamboo", and as such a nod to early Jamaican slackness tunes like Mighty Sparrow's 'Big Bamboo', but at the same time a corruption in Bahasa Indonesia of the term from Jamaican patois "bomboclaat". Muhamad's version of 'One Love' we get with 'Satu Dunia' ("one world"), a song that opens with the unexpected sound of an Algerian mandole (related to the mandolin) and for which he joined forces with Jamaican singer Kelissa, who for the occasion can be heard in Swahili as well as in English.

Apart from Kelissa, Cali P, Tóke and Promoe (the up-tempo 'Jawara', which translates as "champion", and one of our personal favorites from the track list), Million Stylez ('World Wide Love'), Tippa Irie & Noizekilla ('Step It') and Jahcoustix ('Thin Red Line', once again featuring Toké), also appear in the track list.

Varied and lyrically very multi-layered album that took little to convince yours truly.