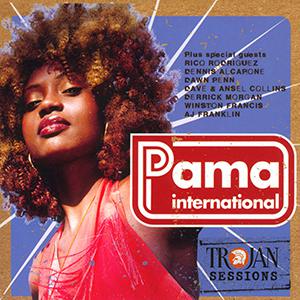 Pama International had the honor of being the first band in years to be offered a recording contract by Trojan/Sanctuary! Which poses the question: "Who the hell are these guys?" They describe themselves as a soul-injected ska, rocksteady & dub sensation for the 21st century and their sound can hardly be described better than that. For 'Trojan Sessions' Pama International (whose members earned their credentials playing in bands like Madness, The Specials and Galliano) eagerly used Trojan's address book and invited a number of veterans to come and do their thing, resulting in tracks like 'It Ain't Funny', the first Dave & Ansel Collins since the 1970s. Can also be heard on 'Trojan Sessions': Rico Rodriguez' trombone, the voice of Dawn Penn and the deejay-vibes of Dennis Alcapone. Nice one!