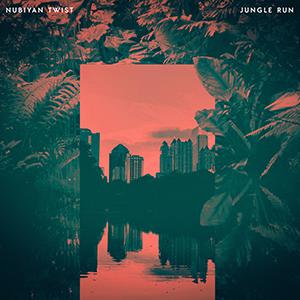 Three years after the release of their 'Siren Song' EP, Nubiyan Twist returns with 'Jungle Run', the second long player by this band dividing its time between London and Leeds. Just like on 'Siren Song', jazzy soul and hip-hop flavored tracks like opener 'Tell It To Me Slowly', 'Bother' or 'Permission' took us back to the heydays of British Acid Jazz, , given shape in the late nineteen eighties and nineties by bands like Galliano, Brand New Heavies and Incognito. But Nubiyan Twist is more than that, as they prove with the mesmerizing Ethio-jazz of 'Addis To London', a collaboration with grandmaster Mulatu Astatke, the infectious afrobeat of 'Basa Basa' (even though afrobeat pioneer Tony Allen strangely enough pops up in the rather soul jazz flavored 'Ghosts'), the afrobeats of killer 'They Talk', or even the samba-jazz of 'Borders', featuring Pilo Adami, the band's Brazilian percussionist, on vocals. In the strictest sense 'Jungle Run' may not be world music, but nonetheless Nubiyan Twist have produced on hell of an album here. Or as singer Nubiya Brandon summarizes it in title track 'Jungle Run': "Where you from? I'm from wherever I be! On this jungle run we're all the same!".