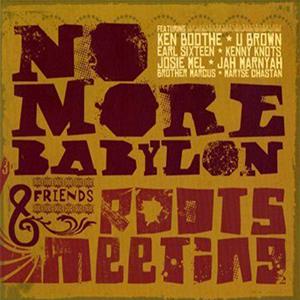 For 'Roots Meeting', French band No More Babylon from Toulon invited a whole host of "friends" such as Earl Sixteen (with whom they already recorded the live album 'Live With No More Babylon/Mash Up The Dance' back in 2004), U Brown, Ken Boothe and Josie Mel. Nice to know is that the band was recently extended with a horn section, something that, in their own opinion, can only strengthen their roots sound. After some detective work we even found out that that horn section will be led by none other than Guillaume 'Stepper' Briard, saxophonist of the Homegrown Band (and recently also responsible for the production of Omar Perry's debut album). With 'Roots Meeting' No More Babylon is responsible for one of the strongest roots releases of this year. Vive la France!