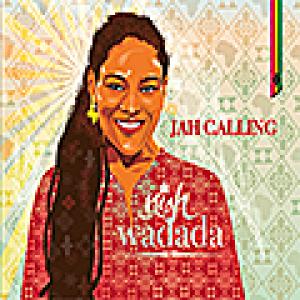 Earlier this year we already presented 'Queens & Kings', a 5 tracks EP by Dutch-Cape Verdean singer Nish Wadada. But where that collaboration with Portuguese Delmighty Sounds seemed to target the UK dub and steppers scene, for 'Jah Calling', Nish rather opted for a classic roots sound with the odd jazzy undertone here ('Jah Works', 'Sista Queen'...), something which should at least in part be credited to the team of Microkosmo Music in Paris (see also Mo'Kalamity). Wadada is proud of her Cape Verdean roots, proven by songs like 'Kriolo' or 'Korda', in which she sings in Creole. It's those Creole influences that give 'Jah Calling' extra color and originality and will possibly make Nish appeal to a world music audience as well. Like on 'Queens & Kings', 'Jah Calling' also contains a duet with Cedric Myton and 'Mama Africa' is one of the highlights from the track list. Just the once ('My King') Nish explores an upbeat ska riddim, and closing track 'Oh Jah' is an intimate acoustic ballad. Excellent debut effort from a lady you should absolutely keep an eye on!