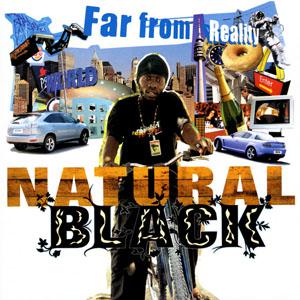 Stating Jamaica is overflowing with musical talent is probably still an understatement, so question is if the island is still in need of foreign influences? Apparently it is, because British Guyana-born Natural Black is doing far from bad in the Jamaican charts. His debut album 'Spiritual Food', released a few years ago, put him in the spotlight as an upcoming singjay, but then things went quiet again. Natural Black had to deal with some serious personal problems and the subsequent stress even made him loose his dreads. He managed to make his way back though and now effortlessly reclaims his former status with 'Far From Reality'. The eponymous title track was already a huge hit and the album cover, showing Black posing on his bike in front of a backdrop of Western luxury goods, hints at some of his colleagues in Jamaica who clearly have lost their grip on reality.