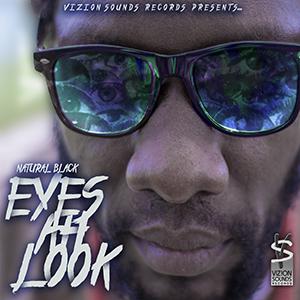 We'd honestly lost sight of Guyanese reggae artist Natural Black, but with 'Eyes Ah Look', recorded for Walter 'Wally' Fraser's Vizion Sounds label in Guyana, Mortimer Softley proves he's still standing strong. 'Eyes Ah Look' is already the second album Natural Black recorded for Fraser, following 2007's 'Cool Nuh Black'. For this long player Black collaborated with bands like Firehouse Crew from Jamaica and the Guyanese Heatwave Band. Opener 'Championship', the first in a whole series of love tunes on the album (see also 'Surrender Your Love', 'In And Out Of Love' or 'Need Your Love'), immediately hits the spot, but for some true lovers rock style check out breakup tune 'She Gone', for which Natural Black revisited the Rougher Yet riddim. A nice variation on the proverb "Hear no evil, see no evil, speak no evil!" Black provides with title track 'Eyes Ah Look', in which he states: "Eyes ah look, ears ah listen, nose ah smell, my mouth haffi say something!". Black will undoubtedly cause some controversy with 'Flat Theory', in which he proves himself a supporter of the theory that the earth is flat and, at the same time, also questions the veracity of the moon landing. For 'Praises', an ode to The Most High and one of the highlights on 'Eyes Ah Look', Natural Black drew inspiration from Psalm 23: "The Lord is my Shepherd; I shall not want. He maketh me to lie down in green pastures: he leadeth me beside the still waters...". Natural Black concludes with the equally excellent 'Too Much Backstabbing', a justified critique of the selfish society in which we find ourselves. 'Eyes Ah Look' definitely demonstrates Natural Black is still on top of his game!