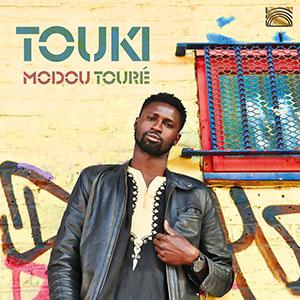 Stating that Modou Touré was born for music, wouldn't be too far from the truth, as the Senegalese singer-songwriter is the son of Ousmane Touré, known from Touré Kunda, one of Senegal's most famous musical exports.

From the age of fourteen Modou started playing with several local bands in Dakar, but it wasn't until 2000 that he founded his own band, Telo. Along the way, Touré also became a proficient guitarist, and in 2007 a first international tour with Melokaan, a Senegalese band from Dakar, followed.

In the UK, Modou connected with local band Lolou, joining them for several concerts all over Great Britain. In 2012 he met English blues guitarist Ramon Goose, resulting in a collaboration that in 2015 would lead to 'The West African Blues Project' album. In that same year Modou also started working on what would eventually become this first solo album, 'Touki'.

For 'Touki' he joined forces with Senegalese drummer and percussionist Papis Diongue, and the result is this very catchy poppy West African long-player. 'Touki' translates from Wolof as "a journey", and Modou summarizes the album as follows: "This is my life story; learning from mistakes has given me the strength hand courage to follow my own path!".

Title track and opener 'Touki' talks about the fate of a young African, who in search of a better life, learns with trial and error that not everything always goes as planned. The more intimate 'Xibar' is of the same order. In 'Wakh Di Tanne', Modou calls for unity on the African continent, proving pan-Africanism is still alive and kicking. The contagious 'Dembeu Wone' is a plea not to let ancestral African cultural traditions, customs and history disappear.

But of course Modou remains a descendant of the Touré family, and since Touré Kunda also always liked incorporating reggae influences, 'Touki' simply had to include a dash of African reggae, and that's exactly what we get in closing track 'Noone', in which Touré warns us about people who're friendly to your face, but just as soon would put a knife in your back, or as the O'Jays used to sing in 'Back Stabbers': "They smilin' in your face, all the time, they want to take your place, the back stabbers...".