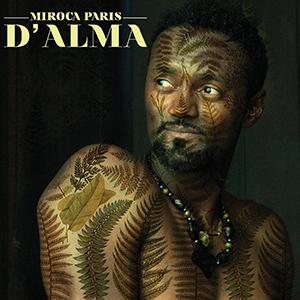 Miroca Paris was born into a musical family on São Vicente, the northernmost island of the Cape Verde Islands. As a child he first leaned towards the drums, but as a teenager also discovered his voice and started learning guitar and percussion. It was also thanks to his talent as a percussionist that not much later he was invited to join at A Batucada, a local percussion ensemble. However, in 1998 Miroca decides to move to Portugal, where, as a drummer and percussionist, he collaborates with Sara Tavares and his uncle Tito Paris. The pivotal moment in his music career came in 2000, when he was asked to join the backing band of Cape Verdean diva of morna Cesaria Evora. For eleven years Miroca toured the world as Evora's percussionist, but when in December of 2011 the singer passes, Paris starts writing a new chapter in his career, focusing on a solo career (something Cesaria had advised him to do more than once). In December of last year Miroca already presented a first single, 'Mund Amor', now followed by debut album 'D'Alma' (loosely translated: "from my soul"). In the track list of 'D'Alma' a mix of original songs and covers, among which 'Guilerhimina' by Miroca's uncle Tito Paris, but also the beautiful 'Ninguem' by Gerard Mendes (better known as Boy Gé, a Senegalese artist of Cape Verdean origin and one of the founding members of Cabo Verde Show, one of the most popular bands in Cape Verdean music history), whose guitar-playing can be heard in the song, giving it a bit of an eighties vibe. With 'Ka Bu Frontam', 'Mocinhos' and 'Nka Pur Si', songs originally recorded by Meno Pacha, Gama 80 and Kaká Barbosa, are Paris' homage to funana, a music genre that at one time was still banned on the Cape Verde Islands as the Portuguese colonial rulers considered it to be the soundtrack of the budding independence movement. Our personal favorite from the track list is 'Jack (Jah)', a song written by Sallah Anne for which Miroca gets vocal support from René Cabral, another ex-member of Cabo Verde Show. But Paris concludes with a live version (recorded in Bleza, Lisbon) of the aforementioned 'Ninguem'. With its mix of morna, coladeira and funana, 'D'Alma' is an excellent introduction for those who want to get to know Cape Verdean music tradition. Top debut by a young veteran and one of our absolute world music favorites for 2017!