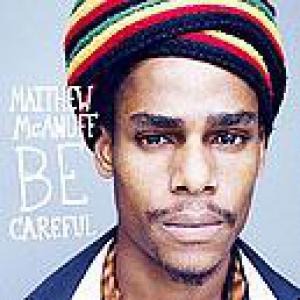 Rarely felt as double as with Matthew McAnuff's 'Be Careful'. On the one hand, this is of course the downright stunning debut of a young Jamaican promise, but the fact that due to tragic events in 2012 we're forced to add "posthumous", is less cheerful (in August of last year, Matthew was stabbed to death in unclear conditions in Montego Bay). 'Be Careful' remained unfinished for a while, but was now completed by accordionist Fixi (Java, Winston McAnuff) and Tom Fire. Of course 'Be Careful' contains well-known tracks like 'Brainwash' (recorded for Tom Fire) and the sadly prophetic anthem 'Be Careful', but the other tracks on the album are worth your attention as well (opener 'Jah Bless', 'Midnight Rolling', 'Move Out Of Babylon') and with musicians like Flabba Holt, Style Scott, Dwight Pinkney and Sticky Thompson that should come as no surprise. The simplistic lyrics of 'Make Up Stories' ("girl I need you in my life and I want you for my wife") make it stand out from the rest of the songs in the track list, but apart from this one error in judgment this musical testament stands solid as a rock. Rest in peace Matthew!