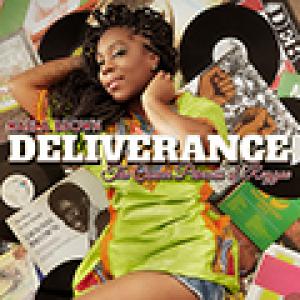 Just before the end of the year, Marla Brown, daughter of the eternal Crown Prince of reggae Dennis Brown, presents 'Deliverance', a 6 track EP on which the spirit of her father is omnipresent. 'Deliverance', the title of the EP, is inspired on the lyrics from 'Visions' and in 'Better Days', Marla also hints at a D-Brown classic, this time 'No Man Is An Island'. For 'Debwise' (a title that Marla reads as: "wisdom from Dennis Emmanuel Brown"), the EP's intro, Brown used an old recording of one of her father's concerts and with 'Here Comes The King' she finally serenades the man who in her eyes has never been a crown prince, but will always be a king. The absolute toppers from the track list are 'Hunt You Down' and 'One Shot', duets with Kabaka Pyramid and Runkus for which we used the repeat button several times! Already describing her as "The Crown Princess of Reggae", as depicted on the cover of 'Deliverance', is perhaps a little precipitous, but judging from the tracks on this EP, we're already hoping the best for the future. Marla Brown starts the New Year in style!