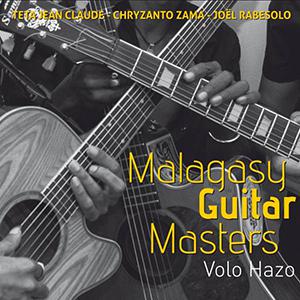 For Malagasy Guitar Masters, three generations of Malagasy guitar heroes joined forces: Teta, a genius from Toliaro specialized in the so-called tsapiky-style, we already introduced you to on these pages in 2014, Chrisanto Zama comes from that same province but is a generation younger, specializing in rodaringa, a very rhythmic style that's often played during wrestling matches in Madagascar, and tsinjabey, Malagasy funeral music, and finally, Joël Rabesolo, the youngest of the bunch, nicknamed the Malagasy Jimi Hendrix, studied at the Royal Conservatory of Brussels, and cites, among others, jazz pianist Keith Jarrett as one of  his greatest influences. 'Volo Hazo' was produced by multi-instrumentalist Tao Ravao, another familiar name if you're a regular follower of these pages. The title track of the album is one of Teta's compositions and an ode to the holy trees in Madagascar, where the locals believe that a place without trees is a place of infertility and death. Trees are considered as a source of food and wealth, but also believed to hold certain. The amontana and aviavy represent life force, and, in the North of Madagascar, the hasina or "dragon tree" stands for spirituality and saintliness. The mandrorofo represents the permanence of life by virtue of its longevity, and the omnipresent and fast-growing bamboo represents family, with the young shoots at its foot standing for posterity. But enough about trees and back to the music, because that's what's 'Volo Hazo' is all about. We were most taken with  instrumentals like opener 'Milomano', Teta's ode to the waves and the sea, 'Be Lamba', in which Joël Rabesolo does the same for the lamba, the traditional Malagasy garment worn by men and women consisting of a rectangular length of cloth wrapped around the body and coming in a wide range of colors and patterns, the already mentioned title track 'Volo Hazo' (another composition by Teta), 'Caravan', a delicious tsapiky-version of the world famous Duke Ellington classic, and finally 'Valiha Malaza', the trio's tribute to the grand master of the valiha, the Malagasy zither, Rakotozafy, who's considered to be the Malagasy answer to Johan Sebastian Bach. The rhythms and melodies of the Red Island continue to enchant!