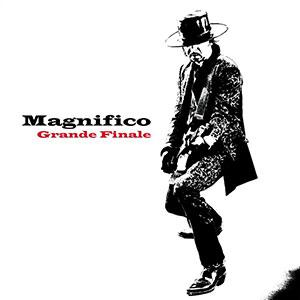 Magnifico is the alter ego of Ljubljana-born Robert Pesut, who, with a mixture of Balkan music, pop and a dose of eccentricity, has become a big star in his native Slovenia. Magnifico's eclectic style seems the ideal act for what has become the epicenter of kitsch: the Eurovision Song Contest. It will therefore come as no surprise to learn the man has defended the colors of his country at various occasions already and that both on (with the song 'Silvija', which became one of the largest Slovenian hits ever) and off the stage (as producer of the trio Sestre winners of the Slovenian pre-selections in 2002). Magnifico may cloak himself in eccentricity and kitsch, with his songs he often also broaches serious themes like chauvinism, intolerance and homophobia ('Halo Gospodicna'). His latest album, 'Grande Finale', is a tribute to the Spaghetti westerns of neighboring Italy: the cover of the album could be a poster for a Sergio Leone film and on some tracks Magnifico even sings in Italian. 'Grande Finale' is clearly aimed at an international audience and in his broken English he is at times reminiscent of a Slovenian version of Shantel, but unfortunately too often the tracks on this album fail to transcend Eurovision level: fun for a little while but not an entire album.