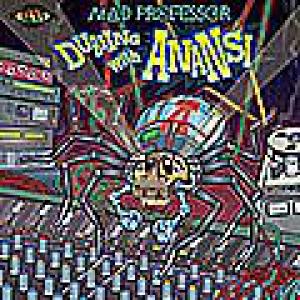 In recent years Ariwa-chief Mad Professor spent a lot of time in The Gambia, where, among other things, he organized a number of editions of the Back To Africa festival. It was therefore only a matter of time for African influences to start popping up in his releases as well and on 'Dubbing With Anansi' that is the case both musically (songs like opener 'Atlantic Crossing', 'Rasta Interpreter' and of course 'Brikama Market', a reference to the city in the west of the Gambia) and content-wise. Key figure on this album is Anansi, a mythical creature, half human, half spider, from Ghanaian culture. The Anansi-stories appear both in African and Caribbean culture and for Mad Professor is a symbol for the willpower of the African slaves, who, in spite of bans on their music and culture succeeded in saving them for posterity. From a musical point of view 'Dubbing With Anansi' situates itself somewhere between a pure dub and an instrumental album and for the Intros of some of the tracks Mad Professor even called on a number of well-known vocalists (Brother Culture, Vivian Jones, Delroy Williams, Frankie Paul…). 'Dubbing With Anansi' also contains the odd classic riddim: for 'The Sound Tester' the professor recycled Dennis Brown's 'Want To Be No General' and 'Tribal Dance' is a version over the Mad Mad riddim. Yours truly was most taken by 'Lil Lopez' which thanks to the use of the steel drum gets a great Caribbean carnival vibe.