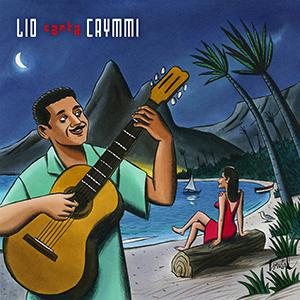 Yours truly could have never imagined crossing paths with Belgian-Portuguese popstar Lio on these pages. Lio, born as Vanda Maria Ribeiro Furtado Tavares de Vasconselos, became an instant pop star in Belgium and France, when, in 1979, her debut single 'Le Banana Split' made it to the top of the charts. For 'Lio Canta Caymmi', the Brussels based singer-songwriter Jacques Duvall, who has been Lio's right hand man for years, introduced the singer to the romantic repertoire of Dorival Caymmi, a somewhat forgotten Brazilian singer-songwriter from Bahia who had his heyday in the nineteen thirties and was revered by Brazilian greats like Joao Gilberto, Gilberto Gil and Caetano Veloso. Lio may be of Portuguese descent, this is still the first album she ever recorded can in her native language. In order to keep Lio's mainly French-speaking fans interested as well, Jacques Duvall added a verse in French to each song. Because they were both fans of his work, Lio and Jacques called on French comic strip artist Loustal to design the sleeve illustration for the album. Classy album that might well give Lio's career a whole new twist.