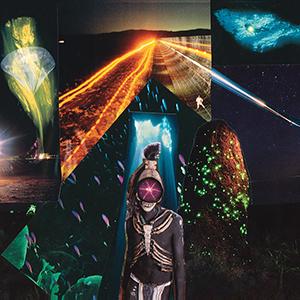 Lightning Orchestra is a twelve-piece ensemble from Atlanta, Georgia, based around multi-instrumentalist, vocalist and composer Travis Murphy, describing the band as "psychedelic booty shakers". With the six track 'Source And Deliver', the Orchestra now presents its long-player debut. Murphy settled in Atlanta back in 2013, after traveling across the US for a number of years. After a brief introduction to the city's music scene, especially the weekly jam at Elliott Street, an Atlanta-based institution run by world-renowned bassist Kevin Scott for over ten years now, Travis decided to set up his own project. Initially the repertoire was limited to covers of funk songs from the nineteen sixties and seventies, soul classics and afrobeat, but in 2016 he also started adding own material, and after two years of hard work the result is 'Source And Deliver'. The songs on the album range from short, barely two to three minutes long compositions (opener 'Theme', closing track 'Time Reprise'), to two magnum opuses each lasting more than ten minutes ('Time (Time)' and 'White Tiger'), with a sound somewhere between afrobeat (opener 'Theme', 'For Those Who Have Yet To Be Born'), Afro-funk ('White Tiger', 'Time (Time)', a nod to soul classic 'Time Has Come Today' by L.A. based band The Chambers Brothers), the vocal and guitar style of Jimi Hendrix and the free jazz of Miles Davis (the vocals of Travis Murphy in 'Power', the guitar parts of Ian Newberry and Stephen Burns in 'Time (Time)' and 'White Tiger', the horn arrangements by Will Hollifield - baritone saxophone, Chris Suarez - tenor saxophone, Dashill Smith - trumpet, Robert Harrington - trumpet, Keifer Johnson - trombone, Danny Wytanis - trombone and Marquinn Mason - tenor saxophone in the aforementioned 'Time (Time)'). Solid chunk of energy bundled into six songs all striking like lightning!