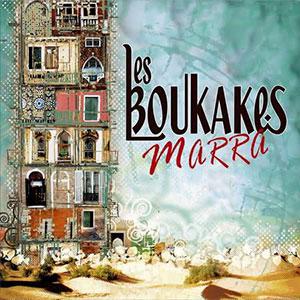 Les Boukakes is what in France is called "une groupe métisse", which actually means nothing more than that it is a band with members of different nationalities and cultural backgrounds, in this case indigenous French and North African immigrants from Algeria and Tunisia. From the contraction of the curse words "bougnoule" (curse word derived from the Wolof word ñuul, meaning "black" and used to describe persons of African origin) and "macaque" (insult often used to describe persons of North African origin and referring to the ape family of the macaques native to this region) they distilled their own reappropriation: Boukakes. Their sound is a "métissage" ("mixture") of Western rock influences with Oriental raï and chaabi; Maroc-'n-roll so to speak, as can be heard from Hoba Hoba Spirit or on the 'Alik' album by Orchestre National de Barbes.

Nour, a project started by Yacine Belahcene Benet, a Catalan with Arabic roots, draws from the same source. The music of Nour ("light" in Arabic) wants to open a dialogue between East and West, but by alternating between French, Spanish, Arabic and especially Catalan, lends his songs a folky punk rock sound in which the Arab instrumentation by Manolo Lopez dominates. Interesting concept, but not immediately the most accessible album we've come across recently.