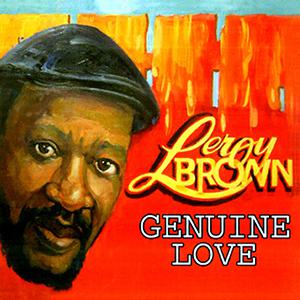 'Genuine Love', the new album by Leroy Brown, doesn't resemble 'Color Barier' (a fantastic rerelease by Makasound) in the slightest. It doesn't need to either, because 'Genuine Love' (released on Brown's own Dakarai label) is more a lovers rock than a roots album and, as lovers rock albums go, it's not a bad effort at all. The song 'Rent A Tile' was already a big hit for Brown and deservedly so because this is as good as lovers rock gets. We'll end with a bit of trivia: At one point in his career Leroy made a living as a (portrait-) painter and the artwork for the album sleeve of 'Genuine Love' is of his own signature.