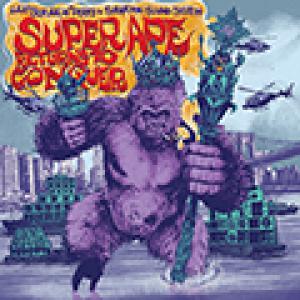 Even though he's well in his eighties now, Lee 'Scratch' Perry, the enfant terrible of reggae and dub, isn't about to call it quits, so it should come as no surprise that his alter ego Super Ape, the reggae-answer to King Kong, is once more at the center of attention. With his original 1976 'Super Ape' album Perry laid the foundations for modern dub, and songs like 'Dread Lion', 'Curly Dub' (a version of Junior Byles' 'Curly Locks'), 'Croaking Lizard' and 'Black Vest' (dub versions of Max Romeo's 'Chase The Devil' and 'War Inna Babylon') have all become classics. In 1978 Scratch presented a sequel with 'Return Of The Super Ape', but then his alter ego was put on ice until Belgian band Pura Vida released 'The Super Ape Strikes Again' in 2016. However, where Pura Vida presented an entirely new album, with 'Super Ape Returns To Conquer', New York based Subatomic Sound System rather opted for a reinterpretation of Perry's original 'Super Ape' album, supplemented with a number of extra dub mixes and new vocals by, among others, Jahdan Blakkamoore, Screechy Dan, and of course the master himself. Of particular interest is 'Underground Roots', if only because it was the very last song to which The Slits-frontwoman Ari Up lent her voice, before she passed away in 2010, and for this revamp both 'Dread Lion' and title track 'Super Ape' got an Ethio-jazz vibe. Subatomic producer Emch sums it all up as follows: "I'm just trying to turn what's in Lee Perry's head into reality. I wanted it to sound like Scratch teleported into 2017 and we gave him technology to bring back to 1976 and create an album 40 years ahead of its time without the limitations of 1976..."; a bold statement, because isn't the reason Perry became famous the unique sound he created at his Black Ark studio? With this project Subatomic Sound System certainly has taken a risk, but they should be damn proud of the result. The last word goes to Perry himself: "Me see how God make nature and me create that sound. Me never copy no man."