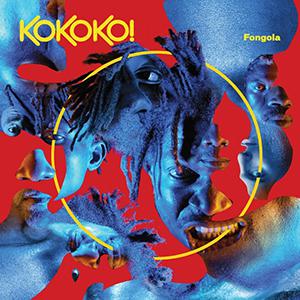 Listening to 'Fongola', the debut effort by the latest Congolese revelation KOKOKO!, inadvertently reminded yours truly of similar "congotronics" projects like Staff Benda Bilili, Mbongwana Star or the pioneers of Konono N°1, but just like each of these bands had/have their own unique sound and story, that's also the case with KOKOKO!. The KOKOKO! Adventure started in 2016 when French synthesizer specialist and producer Débruit (whom we got to know back in 2013 thanks to his collaboration with Sudanese singer Alsarah) was in Kinshasa to record the soundtrack to 'Système K' (a documentary by Renaud Barret about the lively street art scene in the Congolese capital), where he met Makara Bianko, a charismatic vocalist from the Lingwala area, performing there every night with his dancers, singing and dancing over electronic loops, and Boms Bombolo, Dido Oweke, Love Lokombe and Bovic Mwepu, a number of DIY'ers from the Ngwaka area experimenting with self-made instruments like a one-string guitar made from a bicycle brake cable and an empty powder milk can. All Débruit really had to do was bring both groups together and KOKOKO! was born! Most of the material for 'Fongola', which translates as "the key", was recorded in improvised "studios" in Kinshasa and later completed by Débruit at the Abattoir Studio in Anderlecht, Belgium. Hopefully we don't have to tell you that life in Kinshasa is no joke and the band already got its dose of tragedy, with the death of drummer Bovic Mwepu, who lost the battle against lung cancer, still lingering. None the less the members of KOKOKO! don't let these setbacks overshadow the content of their songs, but prefer to talk about subjects like love, magic and sorcery, the need to slow down a bit in life, greed and corruption so characteristic to the Congolese state system, and, perhaps most important of all, being heard and understood. Crammed Discs no longer seems interested in continuing their iconic Congotronics series, so KOKOKO! signed with Transgressive Records, the label that also introduced us to the Malian Songhoy Blues. KOKOKO! has created the perfect accompanying soundtrack to chaotic life in Kinshasa, with the band mainly wanting to offer an alternative to traditional Congolese genres like rumba and soukous.